Day 5
I’ve been looking forward to this day all week! One of my favourite things about mountain biking is just being able to ride amazing trails all day with friends, and that’s exactly what this training session was. Well, it was actually called “4-hour endurance MTB”, but same difference. This time I slotted myself in with group 2, because I wanted to challenge myself a little bit more in the technical and “guts” department. Anticipating a quicker pace, I installed my race wheel set with Maxxis Ikons, replacing my burlier Minions, which I’d been riding as confidence-boosters. I was stoked to discover that the confidence I’d gained from riding wider, more aggressive tires did translate directly to the lighter ones. 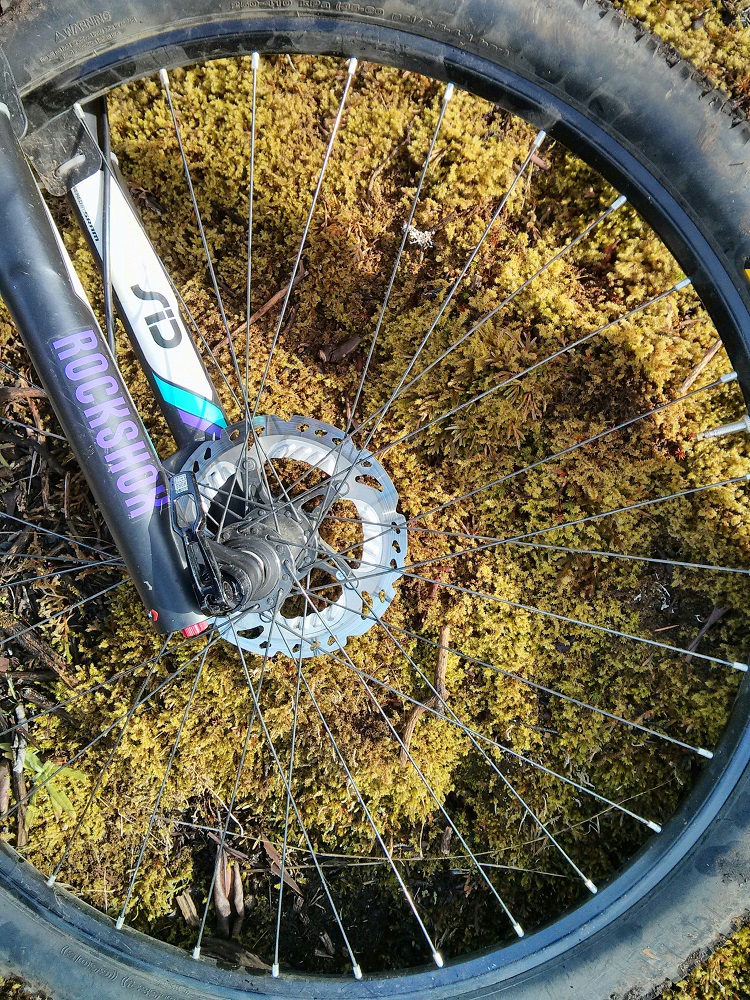 We lucked out AGAIN with the weather, getting a cool, clear morning to rip the trails. The dirt was wicked and traction was sooo good, even on the often-slippy roots and rocks. Best of all, the pace didn’t feel over my head at all, so instead of fighting to keep up, I found extra energy to play on my bike, jumping off of every little rock or incorporate natural trail-side features into my ride. 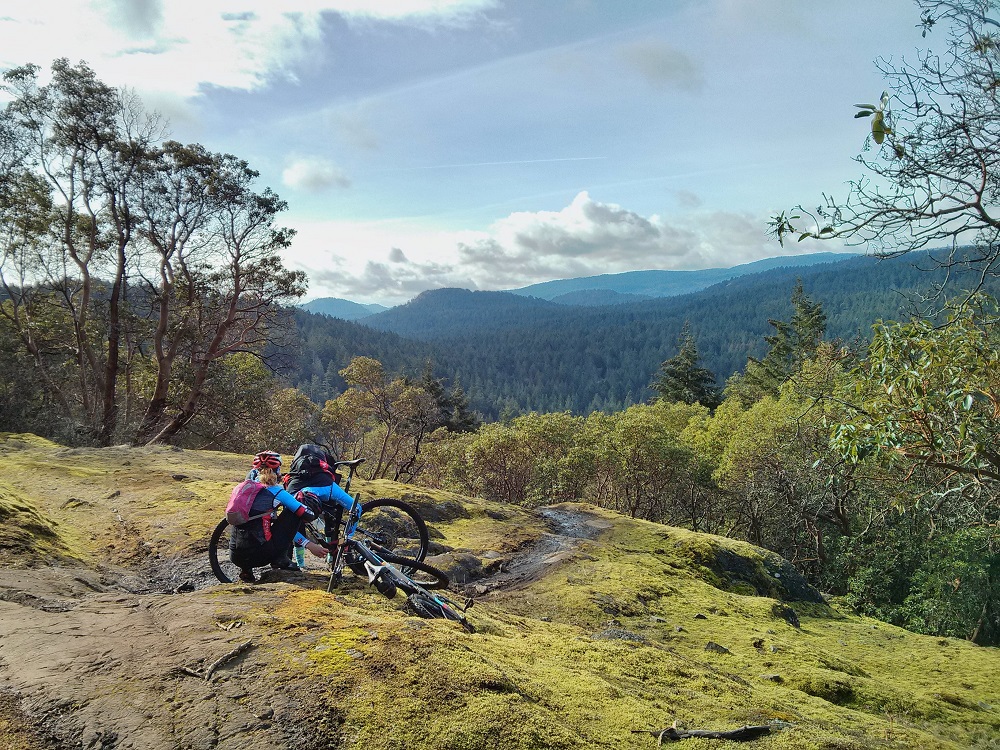 Not a bad place for some trail-side repairs.

On our climb up to the Bubble Wrap trail, we encountered lots of blow-down and had to carry our bikes over trees and branches, but once on our target trail, it was clear sailing. Bubble Wrap is a gem. It is true Victoria natural singletrack, with lots of tricky rock lines, moss, arbutus, and ups and downs. From the topmost viewpoint, you get a cool birds-eye of the surrounding hills and Mill Bay. And this is where McNeely decided to have a lengthy mechanical. It actually worked out as well as it possibly could have, as we were also waiting for Alex to fix a flat. While the repairs were happening, the rest of us spent the time sessioning a tricky series of rock step-ups. The sun was shining and we watched a bald eagle circling for a while. 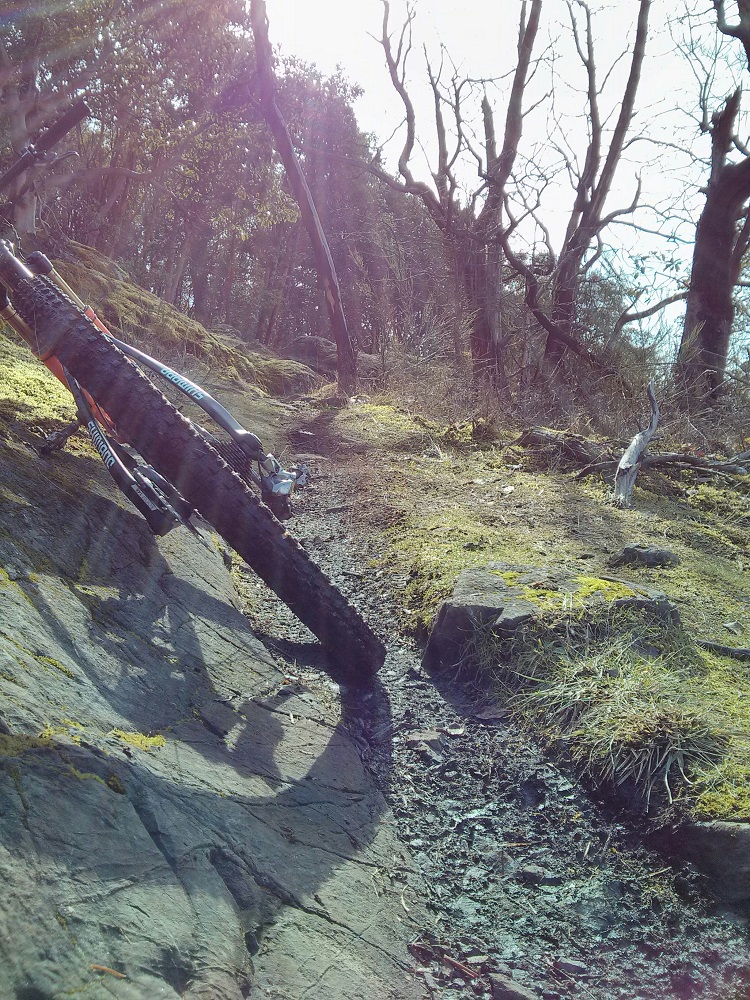 Soaking up the sunshine!

Back underway, we hit more of the Dump’s best trails and I was totally pumped to clean this scary rock face descent on Green Ribbon for the first time. Kika did it first, and when Haley followed her, I didn’t have any excuses, so I followed McNeely down it and owned it! Woohoo! I love that feeling of elation and adrenaline after accomplishing something scary for the first time. This is another thing I love about mountain biking. The fact that you can continue to progress and challenge yourself is just so rewarding. And to put things in perspective: At last year’s camp, Emily was the only woman to do this feature. This time, four of us did (and Emily wasn’t even there!), as after Fleury saw me go for it, she did it too! So yeah, Cool Thing About Mountain Biking #3: you’re constantly pushing each other to reach new heights. 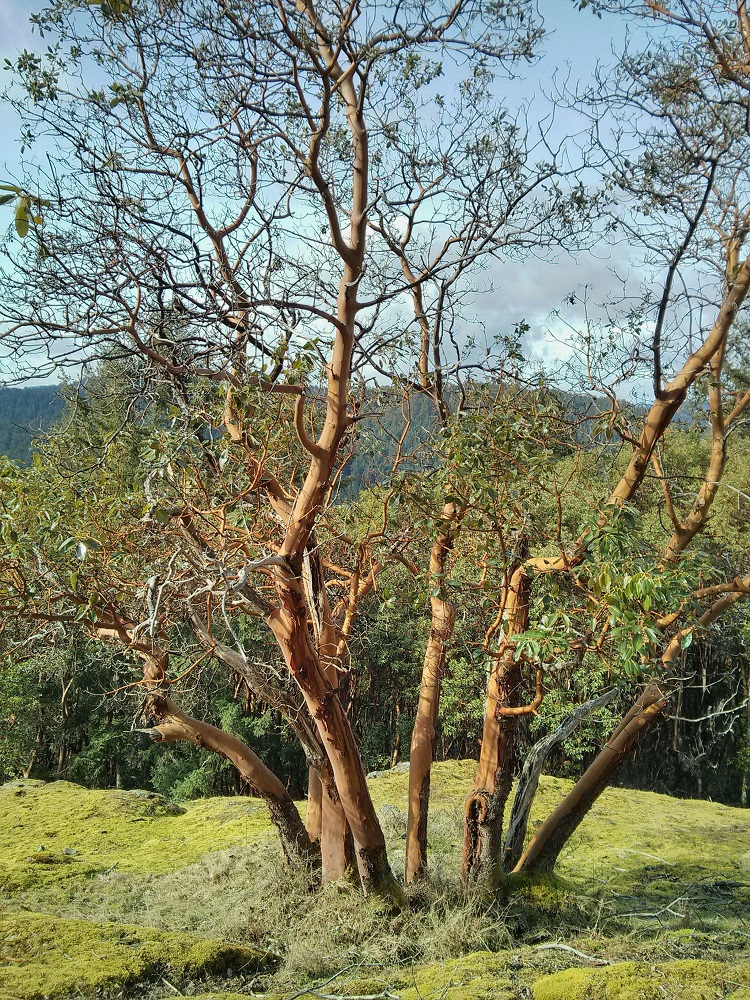 By the end of the ride, I was tired, but not destroyed. I had a very quick turnaround (vanilla protein coconut water — you need to try this if you like coconut water — and a shower) before I had my appointment with Tara. First she redid my concussion baseline test and then she did some IMS (intramuscular stimulation — with a needle!) and worked more on my shoulder, which was still bugging me. And not long after that, it was dinner time!

Day 6
This morning we woke up to snow! It looked lovely, coating everything and drifting lazily from above, but at this point, I’m kind of over it. We’ve had so much snow in southern BC this winter, it’s really overstayed its welcome. The forecast showed that at noon, things would go from overcast, hovering around 0 degrees and 80% chance of precipitation to sunny, 6 degrees and only 10% probability of precip. We were on a self-directed road endurance day, so that made it easy to defer the ride. 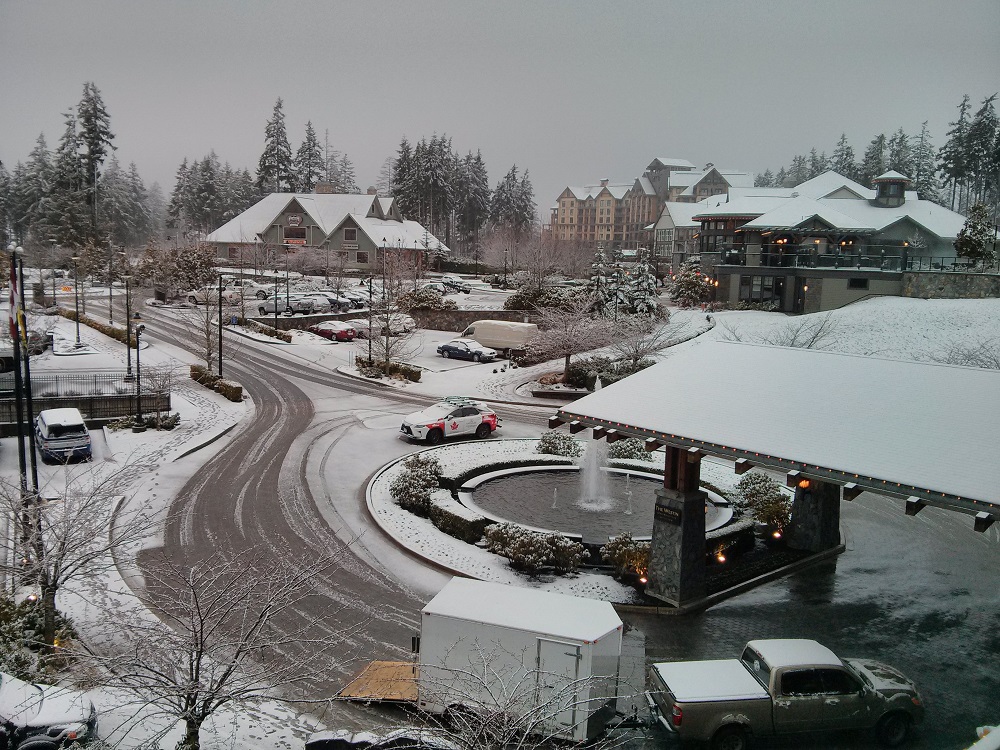 At noon, I met up with fellow teammates who had brought their road bikes, Kika, Fleury, Guthrie, and Lespy, and headed down the mountain. Halfway down, there wasn’t a trace of white stuff to be seen. When we reached Esquimalt, where we caught up with Kika’s Kamloops racer friend, Jane, the roads were dry and it was sunny. Whaaat?! Welcome to Victoria! If you don’t like the weather, wait 10 minutes! 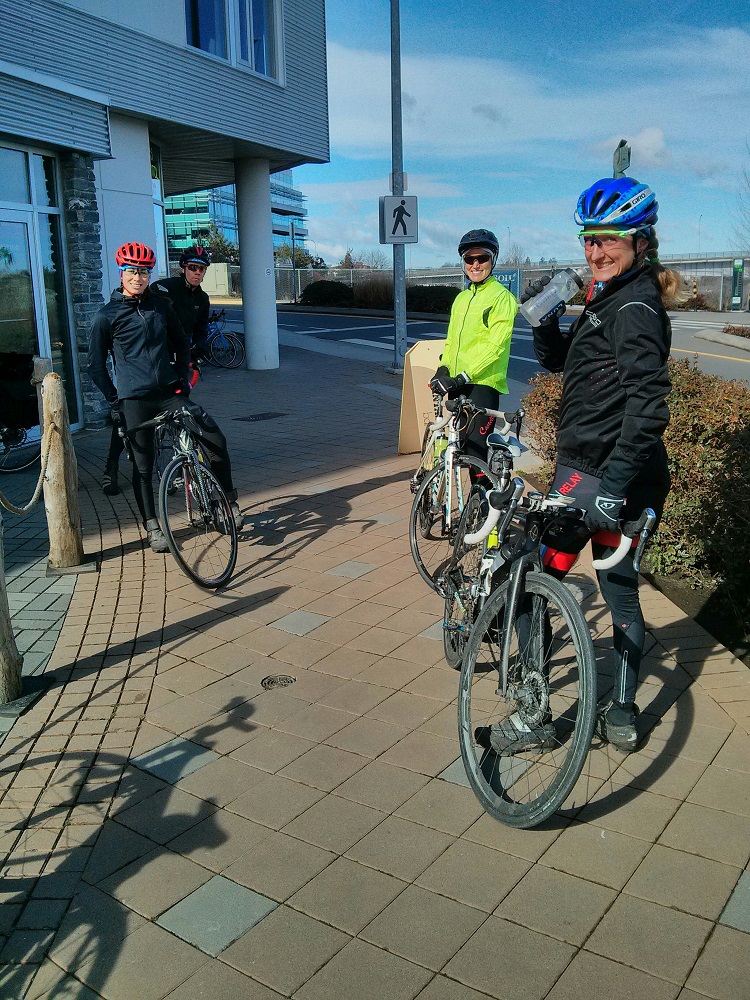 We continued through downtown, past the historic Empress Hotel and BC Legislature, and along the popular (for good reason) waterfront route, which really features Victoria’s coastal beauty. Along the way, we had shed Guthrie and then eventually Fleury and Lespy (they wanted to do shorter rides), so it was down to just three of us. I love riding the roads in the Victoria area. The landscape is so engaging and the roads are awesome. I have such good memories (and some not as good) of training and racing many of these routes from when I was living in Victoria and attending UVic. 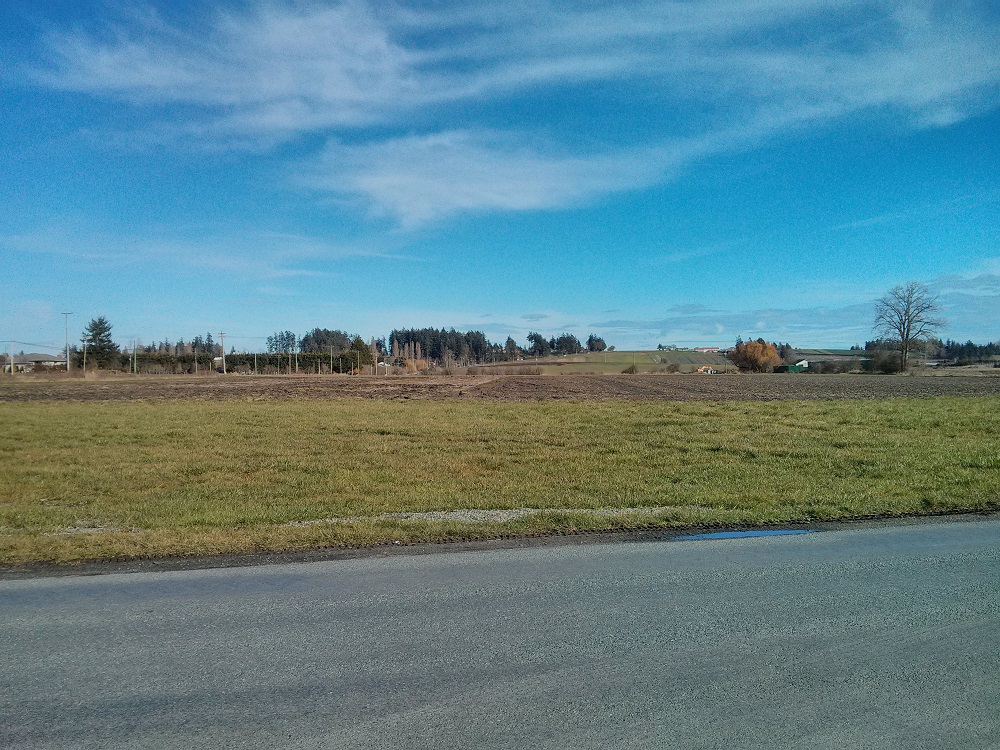 The clouds eventually cleared completely due to a stiff cool breeze, and we were treated to a bluebird day. I didn’t even really need the fenders I had so hastily bought from the local shop (thank you Oak Bay Bikes West Shore!) earlier in the morning and installed immediately before the ride. Feeling good, the three of us pedaled on up the Peninsula and then back along West Saanich road, where we strategically stopped for cortados and pains au chocolat at Mosi Bakery (highly recommended)! After the treats, Kika and I parted ways with Jane and headed back to Bear Mountain via the ultra-hilly (but gorgeous) Prospect Lake and Munns Roads. 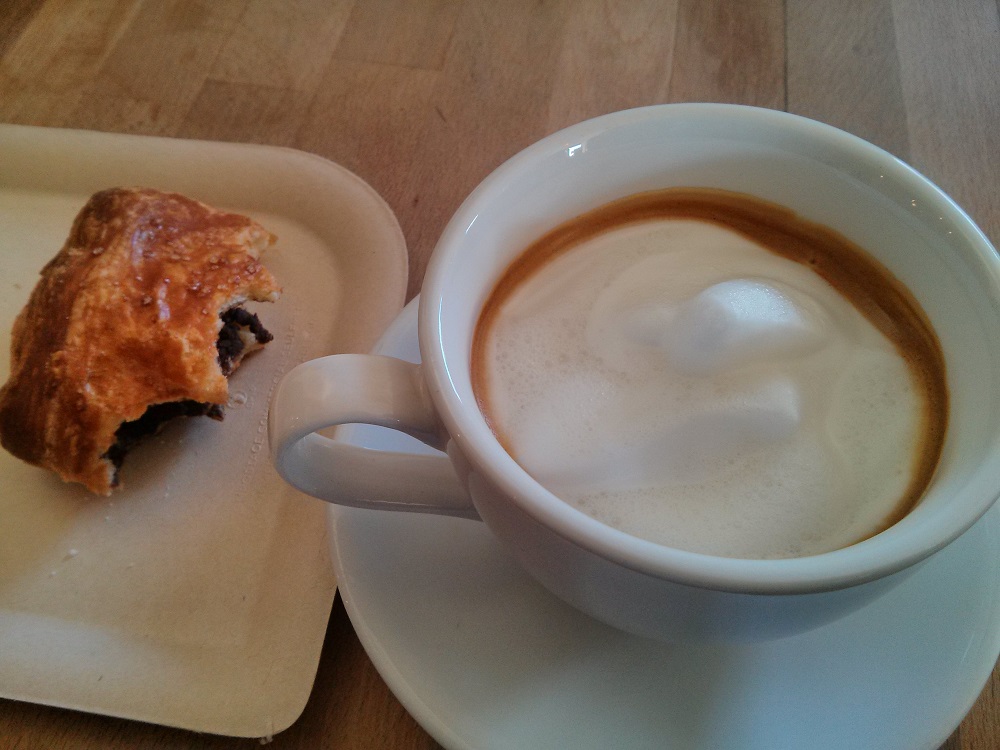 Because of our late start, we arrived conveniently with just enough time to have a quick glass of chocolate milk (poor man’s recovery drink), shower, and head down to dinner, where I got to catch up with my other teammates and reflect on another successful day of training.