Day 3
I was woken up this morning at 6 by a knock on the door. I knew what was going on, because the same thing happened last year, but this is my roommate Cindy’s first camp, so she thought it was housekeeping. She was already up, but she whipped open the door, super annoyed, and barked: “It’s 6 in the morning!” and then attempted to close the door again. It wasn’t housekeeping though, as I had groggily tried to tell her from my bed. It was anti-doping. When Cindy finally figured it out, she assumed it was just for me since she’s not on the WADA Whereabouts Program, but I said: “Are you sure?” Because I also knew from last year, that pretty much everyone on the team was tested. Sure enough, she and I were chaperoned downstairs to fill out our paperwork and give urine samples. Luckily, only 3 of us were called, so it didn’t take long at all (unlike last year, when everyone was called at the same time and it took 2 hours to get through it)!

Back in my room, there was no way I was going back to sleep, so I had a coffee and did some work before breakfast.

Here’s a photo of my doing intensity training during last year’s camp, because I didn’t take any photos today! Photo: Kevin Light

I can’t believe how lucky we’ve been! I remember last year was pretty tough at camp, weather-wise (I’d better not jinx it!), but we’ve stayed dry all week so far during our training sessions and have even soaked up some sunshine! Yesterday was a highlight for me. There was a reason I rode with the smart group on Day 1! It was to “protect” yesterday’s important intensity workout, and it was a success. 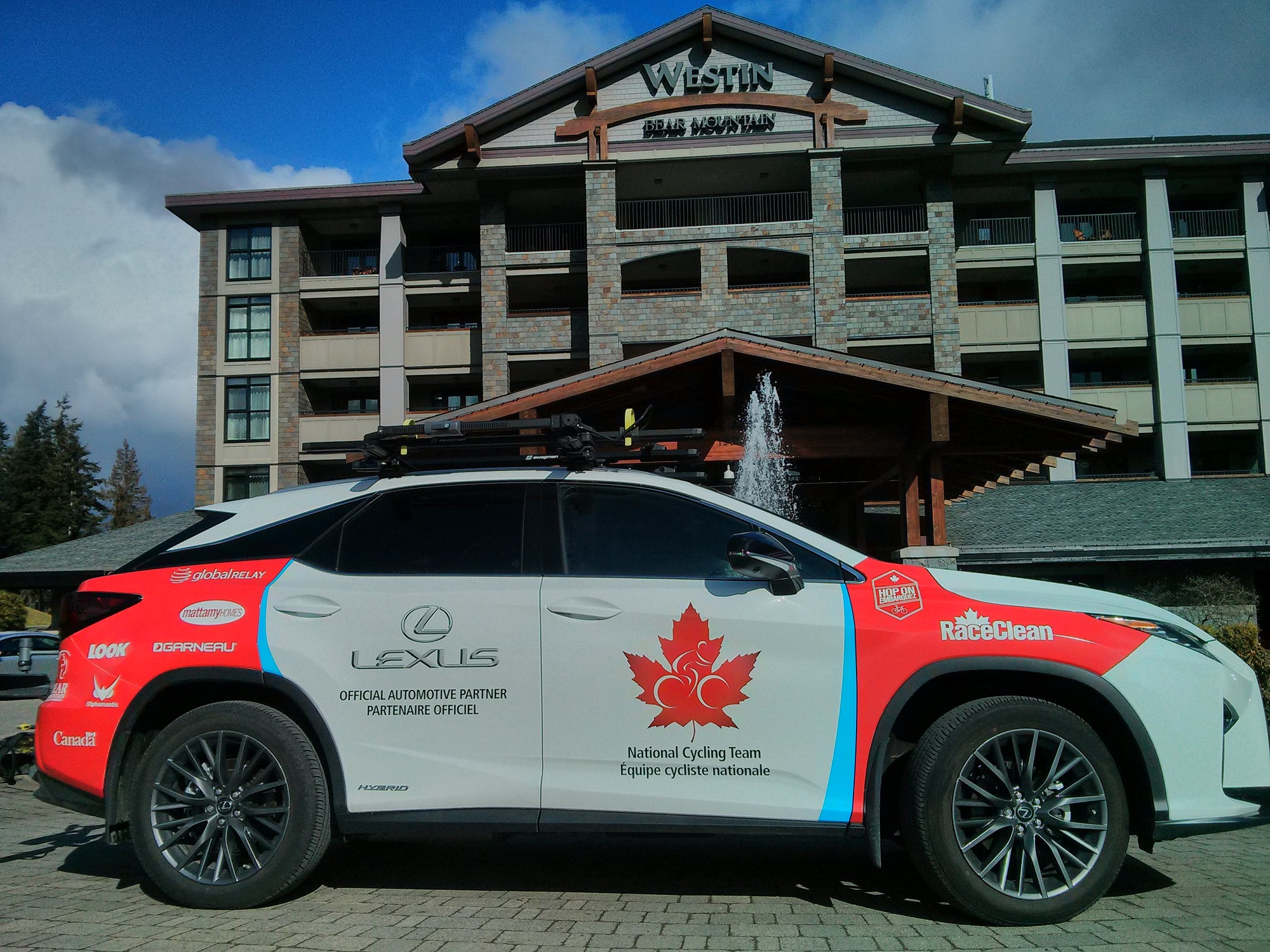 Canadian Team Lexus! In the sunshine! In front of Bear Mountain Resort!

We started out with our usual warm up along the hilly road to the northwestern (I think) entrance of Hartland Bike Park. When we regrouped, it was time for some fun! The workout was 2 times 15 minutes at threshold pace and a 6ish-minute loop that consisted of a wide variety of terrain from steep doubletrack climbing to rock step-ups, technical descents, tight corners, and even some flat power sections. It was such an engaging and stimulated loop, that it honestly wasn’t hard to motivate myself to go hard. It helped, of course, that my legs cooperated. But you know how usually it’s more fun to go a little bit faster on trails so you can really rail them? There you go — interval training! I’m so glad I’m not a road racer…. So that part of the workout went really well, as I enjoyed experimenting with different lines and really focusing on riding smoothly.

Oh, we also had pro photographer/Olympic gold medal rower Kevin Light out in the woods with us taking photos. He did some shoots with us during camp last year and his images are AH-MAZING! Can’t wait to see what comes out of this session. I’ll post some when I get ’em.

Here’s a Kevin Light photo from an interval session at last year’s camp.

The next part of the workout was just as good. We were to do four runs of “Who’s Your Daddy” — a predominantly downhill trail (with some kicker climbs) that has all sorts of fun stuff in it, like bermed corners, lots of roots, jumps, line choices and rock chutes. The first run was just for familiarization, and then the goal for the next 3 was to get faster each time. I didn’t time my recon run, but my second time down I logged a 3:42, then a 3:33, followed by a 3:29. Success! And it was instant feedback! So cool! And just darn fun to try and ride trails faster each time. Once again, so glad I’m not a roadie….

Then it was time to head back, and by the end of it, we’d logged a solid 3.5 hours on the bike. Bam! Time flies when you’re having fun. Oh, did I mentioned that just as we hit the trails on site at Bear Mountain it started to snow? Yeah, it was cold!

Before dinner, I had a physio appointment with Team Canada’s Tara. My bum right shoulder is acting up, so she worked her magic on it. Then I took Cindy and Freddie down the mountain on a grocery and bike shop mission (Cindy flatted three times during the workout!!). Note to self: Never go grocery shopping when you’re hungry. But that’s so difficult when I’m hungry ALL. THE. TIME!

Day 4
Rest day today, but we had an athlete education session at 8:30, so I still got up as normal for breakfast. I’ve started customizing my oatmeal, as the stuff downstairs is pretty plain. Now I bring my own bowl already prep’d with almond butter, sunflower and chia seeds, dried cranberries, raisins, coconut chips and sliced banana. 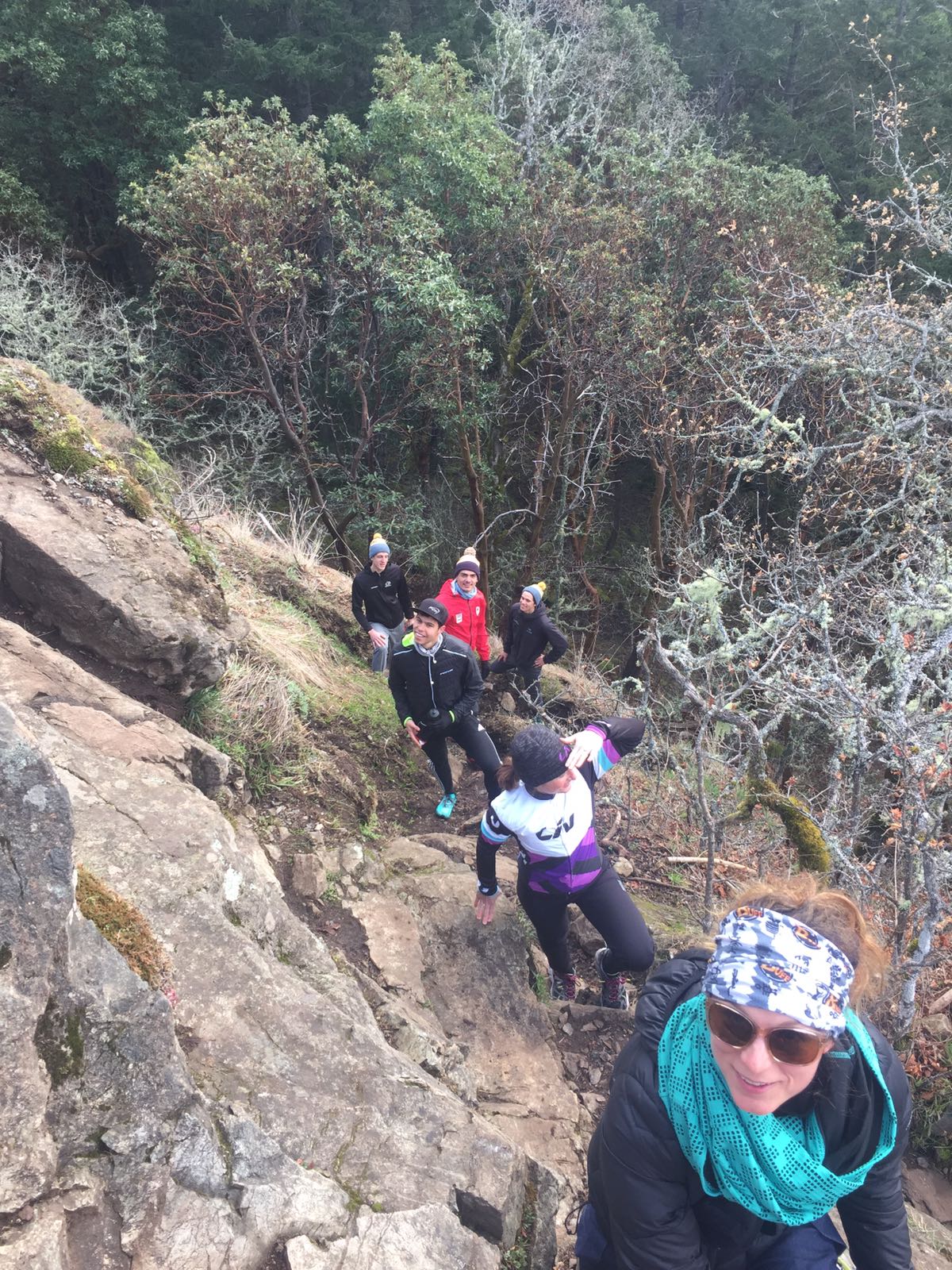 A group of us met at 10 for an “easy” hike up Mt. Finlayson, which is literally right next to the resort. I put “easy” in quotes, because it’s actually quite steep and there’s a lot of rock that doesn’t quite require scrambling, but almost. The pace was pretty relaxed though. What started as an overcast day began to clear as we neared the summit. It was really cold still, but the view that opened up was awesome. I can’t believe this was my first time up there! 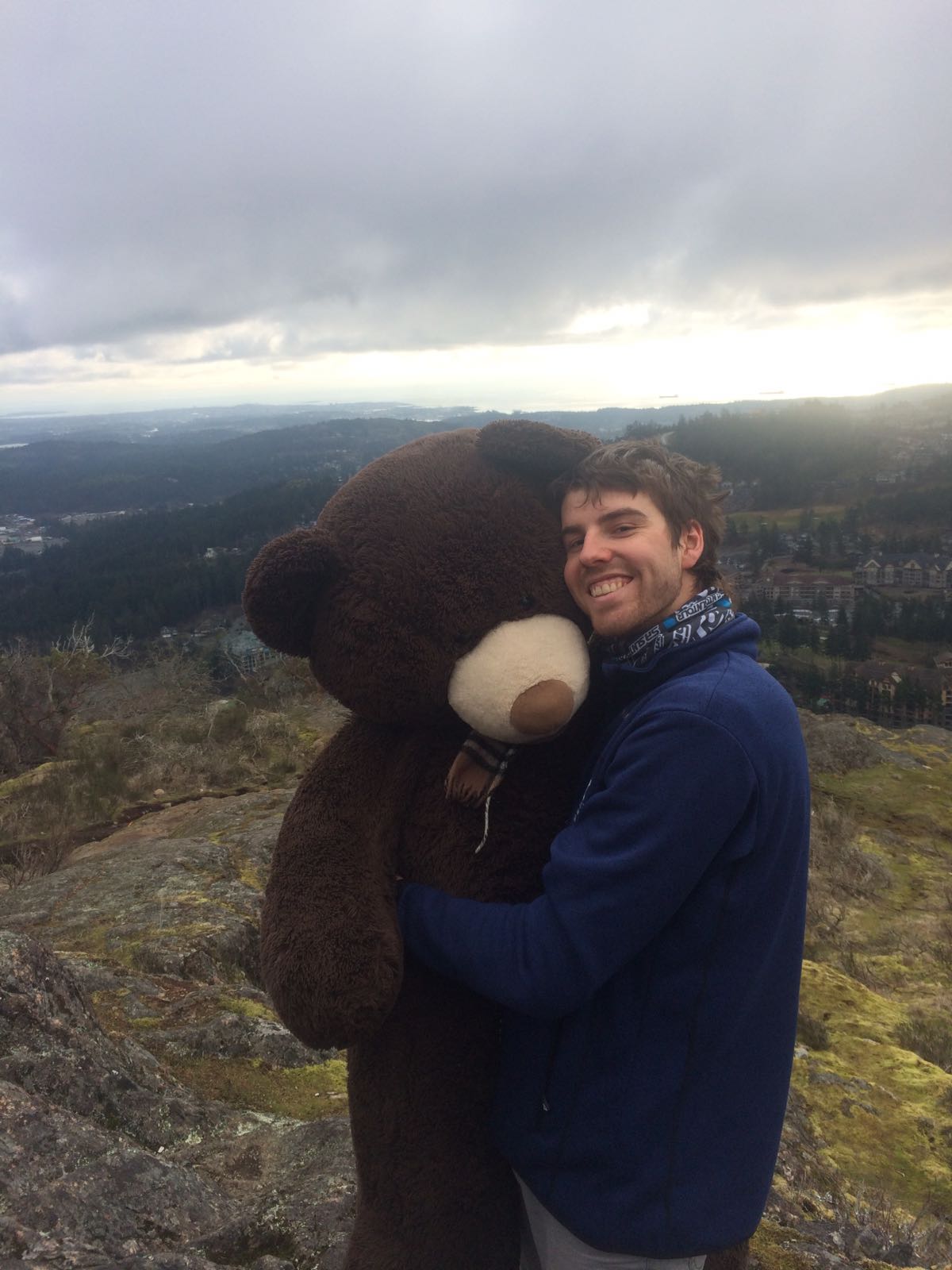 Dre and the bear.

Dre insisted on taking Bear Mountain’s gigantic stuffed bear that normally hangs out in the lobby with us. He received special permission and carried him all the way to the summit, stopping every once in a while to dole out high-five’s and encouragement on behalf of the bear. I think the bear liked it — it really did look like he was smiling. 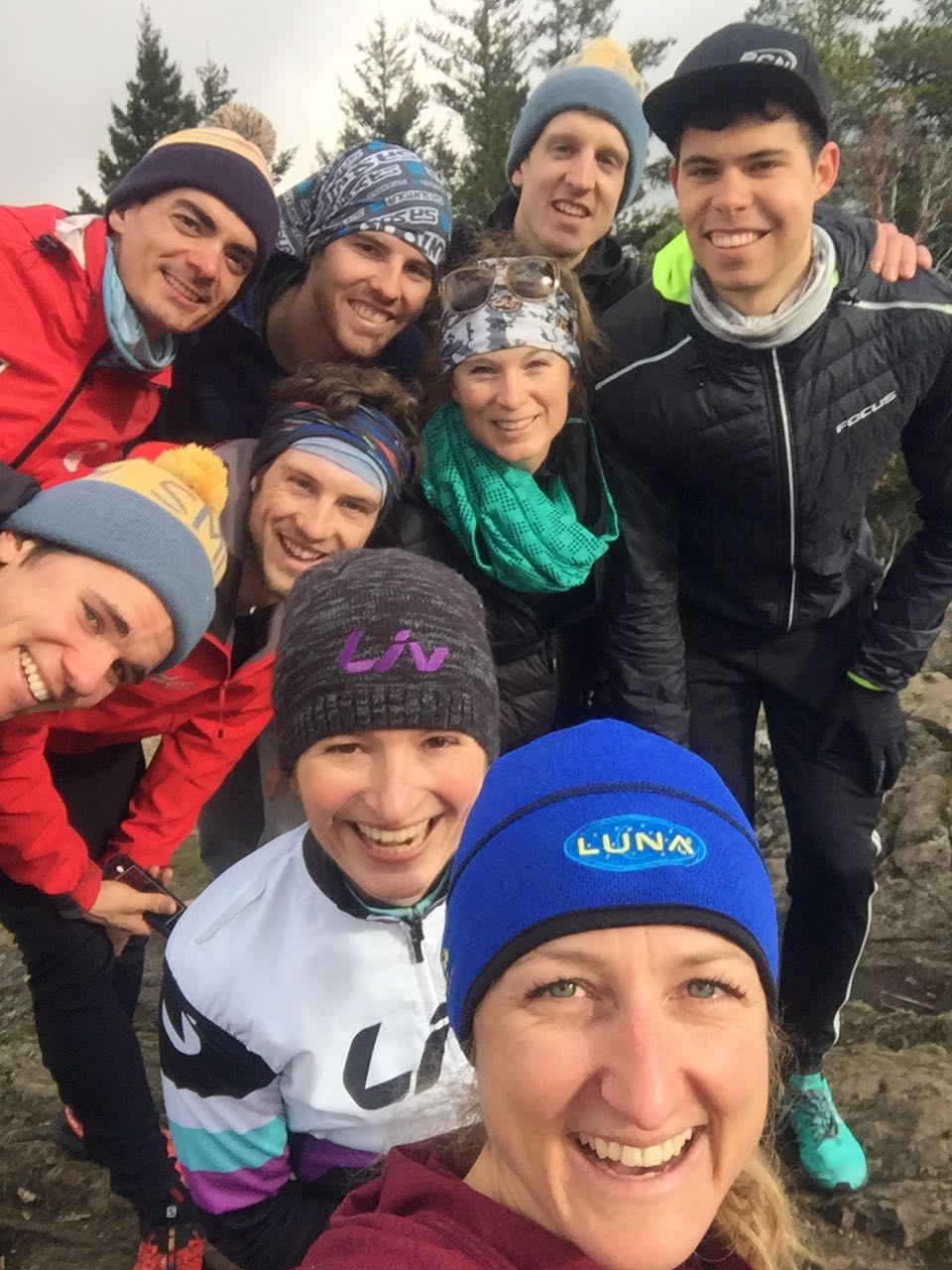 After our awesome hike, I went to the gym and did my regular hour-long strength training session, glad to get it over with, as going to the gym is not my favourite activity! Then it was lunch time, after which I did some computer work, then organized a little off-campus cafe outing with Catharine and Cindy. It’s nice to get away sometimes, otherwise you start to feel a bit stir crazy. 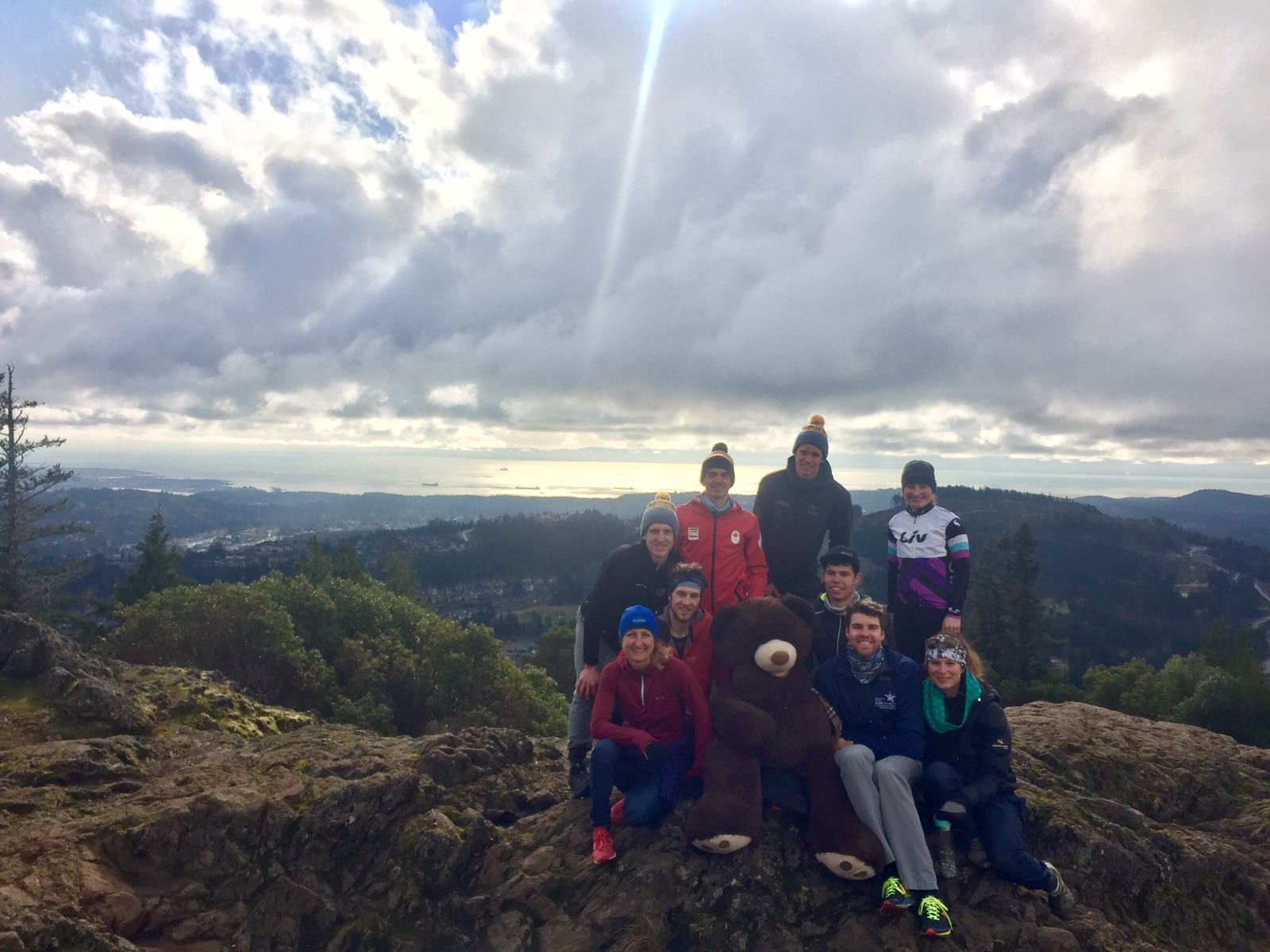 Check out the view from up there! You can even see ships in the harbour!

Before dinner, I did my laundry, had some snacks (for some reason, I’m always extra-hungry on recovery days!), did some more computer work, did some bike maintenance to prep for tomorrow’s training ride… and then it was dinner time! Tonight we had some really yummy salmon with some sort of citrus glaze and shaved fennel (mmmm…), along with a variety of salads, roasted veggies, and potatoes. I have to admit I had a second helping of the potato salad, because there was bacon in it. And I ate a chocolate chip cookie for dessert. And I had two slices of fresh bread with butter, because one just wasn’t enough! Hey, tomorrow we’re doing a long endurance ride, so I need to be fueled up, right?!

And now, I’ll be going to bed pretty soon and I’m wondering how my day went by so quickly.