I’m going to start this blog post by saying I am not triathlete material at all. I flunked out of swimming lessons when I was 6 years old and have always had a healthy fear of the water (okay more than a healthy fear… I was terrified). The few times I have gone on a run, my boyfriend has been kind enough to point out how laboured it looks as I drag my legs along while they are screaming at me: “What are you doing to us!? We don’t do this!” The only one of the three sports that I can somewhat hold my own in is biking. I love biking. 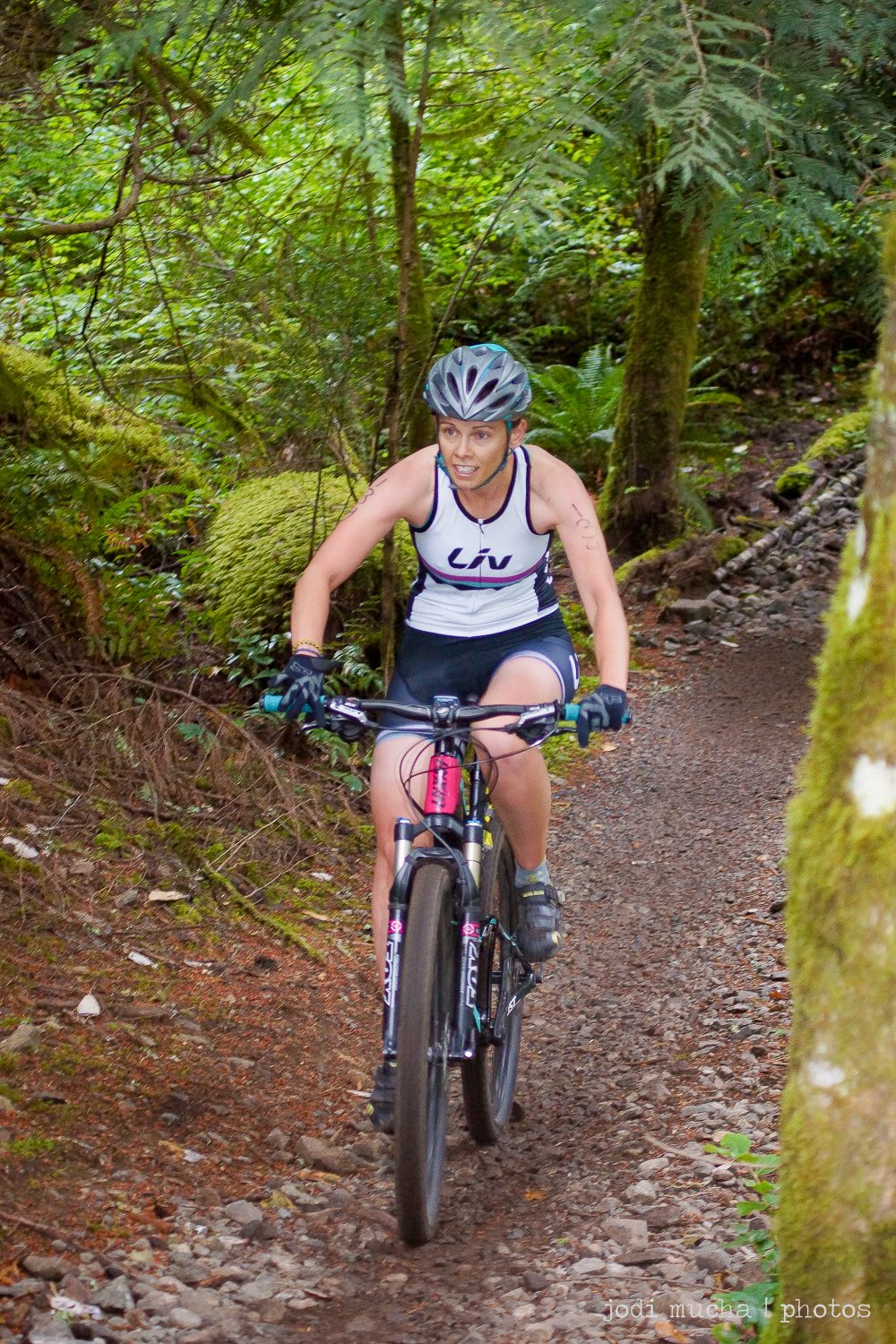 Heidi in her element. Photo by Jodi Mucha

But my love for biking is what got me into this whole triathlon business to begin with. It all started this past winter, after another round of physiotherapy was called for to try and treat the muscle imbalances and some old, nagging mountain biking injuries. My physiotherapist recommended that I try doing a few other sports, other than cycling, to try and develop more balanced musculature. He suggested swimming.

As aforementioned, the water and I are not friends. Other than a brief stint of splashing around in a pool when I broke my leg a few years ago, I haven’t been to a pool in about 20 years. But, I thought it was probably high time that I learned to swim. I registered for adult swimming lessons with the Vancouver-based group Sea-Hiker and found out that I really had no clue what I was doing, but they got to work on setting me straight (apparently, your arms aren’t supposed to go around in a propeller-like fashion). I noticed the benefits of cross training right away with increasing strength in my lower core and upper body. It was also nice to have something to do when my legs were tired from a long bike ride, but I still felt like doing something active.

Fast forward a few months, and I was finally feeling comfortable in the pool and had managed to suppress my survival instinct that told me to get out of the water and run away from it as fast as I could. A mountain biking friend of mine mentioned that she was taking part in the Victoria Xterra that summer. It sounded interesting and it involved mountain biking and I had learned to swim, so how bad could it be? My friend and I talked about doing the short course (750m swim, 12 km Mountain Bike and 4.5km run) since neither of us had ever done a triathlon before. However, me being the thrifty person that I am, I decided at the last minute to register for the long course since it was only $30 more for twice the race (What a deal!). 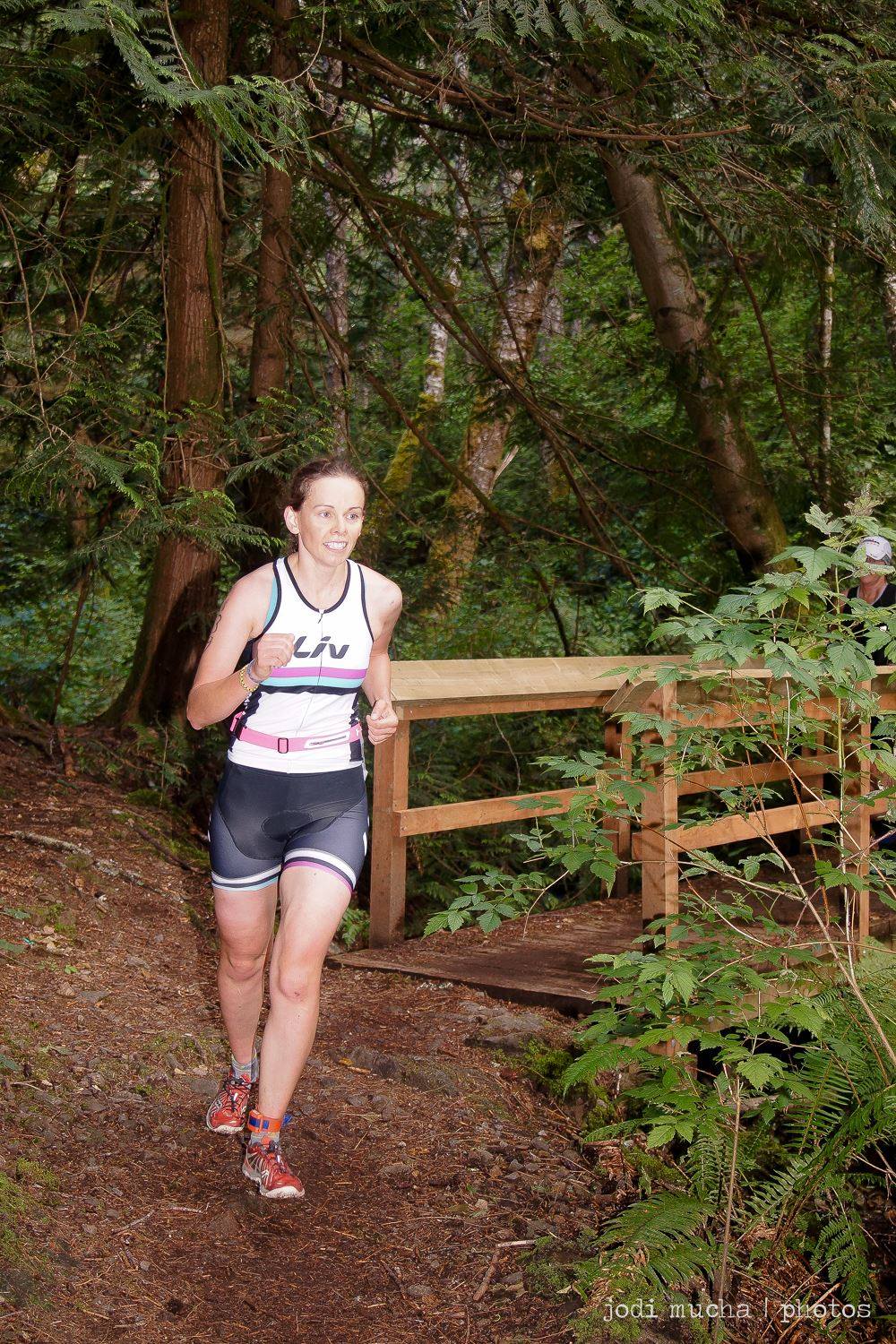 Heidi on the run! Photo by Jodi Mucha

Somehow, I had to find a way to fool my legs into letting me run 9 km. I hadn’t run that far, or really run at all, since my early 20s when I foolishly ran a half-marathon while on exchange in Germany. To be honest, my training for the Xterra ended up being pretty lacking in this department and I never actually ran more than 5 km before the actual day of the race. Ooops.

The day of the race came up way quicker than I thought it would and I felt woefully unprepared. I was cursing my thrifty self for registering for the long course. I watched others and fumbled along, mimicking them as I set up my transition, put on my wetsuit and lined up with the 100 or so other long course participants. The I just tried to just keep calm. The swim involved two 750 m laps of Durrance Lake, which had previously been a beautiful calm clear lake. Right after the gun went off, it was choppy and full of thrashing bodies. My survival instinct kicked in and I wanted out of there! I realized right away that just because I could sort of swim, didn’t mean I could sort-of swim with a group of 100 “friends” who were all vying for top spot. I did my best to keep calm and just keep putting in one stroke after another. Eventually, it seemed like the pack thinned out, the water calmed and I had some space to myself. I was able to finish my second lap in relative peace and quiet. Upon getting out of the water, I looked over my shoulder and realized the only reason it was so quiet was that I was one of the last people getting out of the water. Let’s just say swimming isn’t my strong suit. 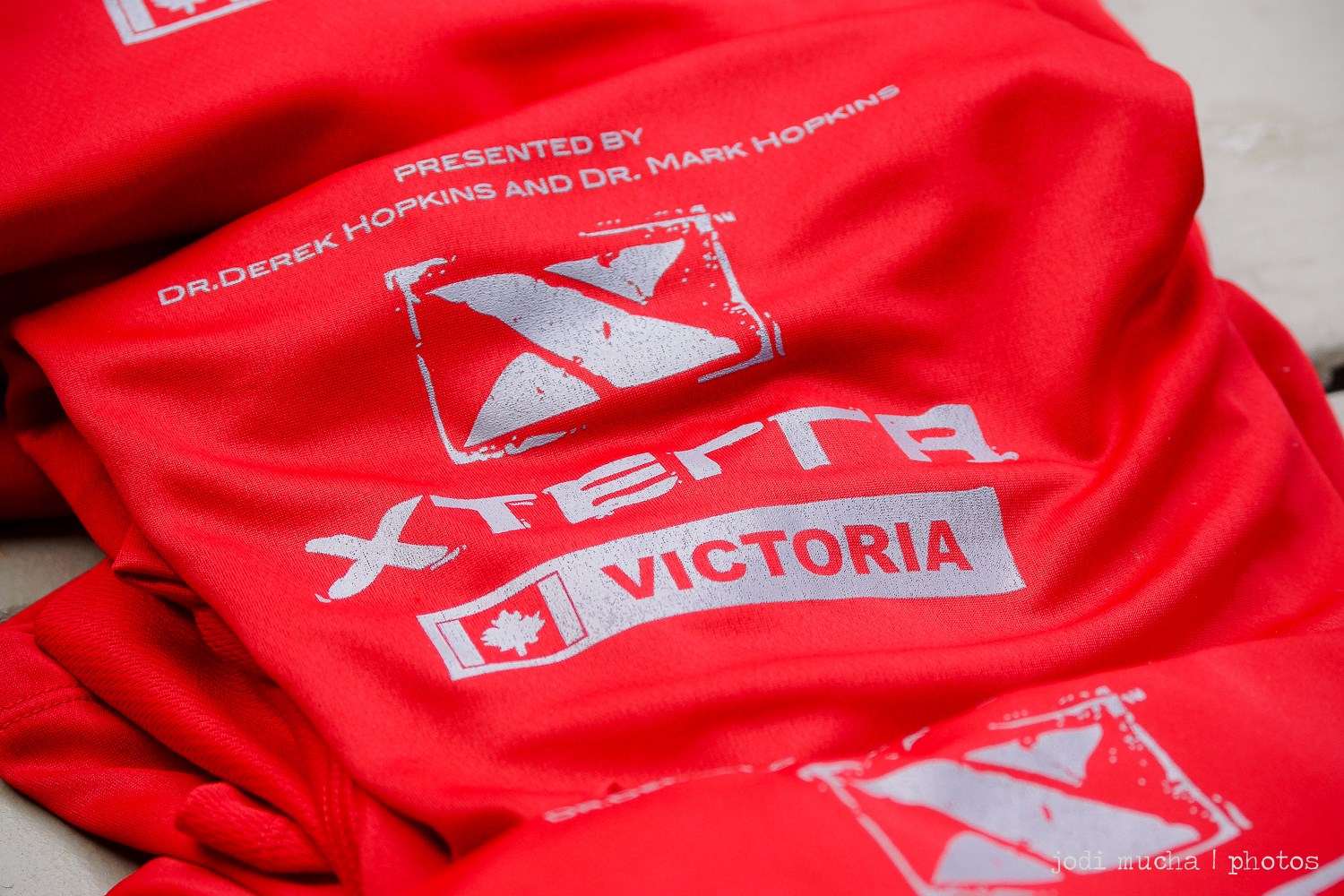 Finishing was a big achievement for Heidi in her first triathlon. Photo by Jodi Mucha

I was excited to get on the bike, where I could really strut my stuff. The Victoria course is fairly technical for an Xterra, which is an advantage for somebody like me with a strong mountain biking background. After my less-than stellar performance in the water, it felt good to be in my element out on the trails. The only weird thing about it was that I was soaking wet and had water in my ears, which threw off my balance. But I guess biking all wet is something triathletes get used to.

After the bike, it was on to my first lap of the 4.5 km run loop around Durrance Lake. I started on the course just as one of the top pro women was going into her second lap – I tried to see if I could keep up with her. I couldn’t. I’m not much of a runner and my legs seemed to think that they had done their job, now that I was off the bike.

Nevertheless, I plodded on. All the people I managed to catch on the bike passed me again on the run. But at this point all I could think about was a cola and the hotdogs I smelled at the finish line.

I crossed the finish line 30 mins over my goal time, but I finished. I also learned some valuable triathlon lessons in the preceding 3-and-a-half-hours.

1. Learn to breathe on both sides when swimming, so if anybody splashes you on one side, you can breathe to the other.
2. One piece tri suits are the bomb. The top of my two piece suit kept riding up and making me feel like a chubby toddler with my belly poking out.
3. Get ear plugs so water doesn’t get stuck in yours ears — it feels weird on the bike.
4. Learn techniques for running up steep hills (i.e. striding). Practice running trails if it is going to be a trail run to make sure your feet and ankles are strong and stable enough for the challenge.
5. Practice transitions (there are some great YouTube videos out there about transitions)
6. Train appropriately for the event and the distance (I know, d’uh!)
7. Pre-ride and pre-run the course when possible so you know what’s coming, know where to pass and how to pace yourself.
8. Don’t panic, just do your thing.
9. Have fun.
10. You can do this.

The last point is the most important. While I learned, I had a lot to improve on (especially swimming!), I learned that I could do this. And if I can do it, you can too. 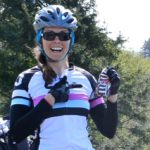 Heidi is a dive-in-headfirst type of woman who never turns down the chance at a good adventure. She loves to ride bikes of all types & whether it’s a race or a bikepacking trip, she’s guaranteed to be smiling the whole way. She also loves to share her favourite sport with anyone who will listen & that’s why we’re proud to have Heidi as a Liv Vancouver Ambassador.