Still stuck on wheel size? Me too! While 29” wheels on mountain bikes make complete sense for tall folks, it’s a tougher decision for those who are on the smaller end of the spectrum, like me, at not quite 5’2” (157cm, to be exact).

I have extensively ridden all the common sizes of mountain bike wheels over my vast experience in the sport that spans decades. In 1988, at eight years old, I got my first mountain bike – a candy-apple red steed with 24″ hoops. My next bike sported the then-standard 26” wheels, which monopolized the mountain bike world until 29” and 27.5” (or 650B) wheels started showing up in the early 2000s.

A lot has happened with technology over the past 20 years, and now most new high end mountain bikes — even trail, enduro and DH — are 29ers. Bikes with 27.5″ wheels still hold a chunk of the market, but are becoming less common, while the 26er has become virtually obsolete at the top end of the market. It should be noted, however, that 26ers are still the most common mountain bikes out there in the world, since not everyone has thousands of dollars to spend every year on a new, up-to-date machine.

Early 29ers were often criticized for handling and fitting poorly, but a revolution in mountain bike geometry has resulted in great handling 29″ wheeled bikes that can also fit small riders extremely well. The 27.5” wheel was introduced to address the early fit, function and handling challenges of the 29er, offering an alternative between 26ers and 29ers that seemed to give riders the best of both worlds.

“…the 29er seems to be winning the popularity contest, and no longer just in the XC domain.”

However, due largely to consumer demand, the 29er seems to be winning the popularity contest, and no longer just in the XC domain. Whether the 29er is truly the best of the two is still hotly debated and I’ll leave it to you to decide for yourself. The fact remains, both have their advantages and disadvantages relative to one another, but the good news is – thanks to innovative brands like Liv – the choice is no longer a luxury enjoyed exclusively by tall dudes.

Advantages
– once the wheel gets rolling, it keeps rolling longer
– generally results in a more stable ride, because larger wheels result in a longer wheelbase
– bigger wheels roll over obstacles get better, because they don’t get caught up on things as easily
– taller wheels and longer wheelbase make it much harder to go over the handlebars
– better traction due to longer contact patch
– much more choice in tires and after market wheels, because it is now the dominant wheel size

Disadvantages
– harder to get the wheels moving initially (more force required)
– heavier wheels and tires
– handling can feel slower/more sluggish due to longer wheelbase and bigger wheel
– slower to stop (takes more force to stop an object with greater mass)
– frame size is constrained by larger wheels, so may not fit some really small riders

Still unsure what’s right for you? Same! I think it all comes down to what’s most important to you in a mountain bike and that depends a lot on your riding style and the type of terrain you primarily like to shred.

“…nothing can make up for an ill-fitting frame.”

The first and foremost factor should be fit – and that’s not just whether it’s possible for you to ride a given bike, but ask yourself if it’s the ideal fit. The only way to truly discover that is by having an expert help set up a bike for you and then taking it for a spin. Ideally, you’re comparing it to one or two other options so you can feel the differences and really narrow in on what you prefer. And remember, a lot of fit factors can also be changed simply by adjusting/swapping the stem, handlebar and saddle. However, nothing can make up for an ill-fitting frame. So I’m sorry to break it to you, my wee friends… if you’re really tiny, a 29er may not be in the cards for you.

“…if you like tech and new things, (like I do) jumping on the 29er bandwagon may be the way to go.”

Now I’m sure you want to know which wheel size I prefer, but unfortunately I can’t give you a definitive answer. I have made lifelong memories, ridden unforgettable trails, achieved career-best results, connected with amazing people, gained valuable skills and had some of the best experiences of my life on every bike I have owned, regardless of wheel size. That said, because 29ers seem to be driving the mountain bike industry, it just follows that 29ers will be seeing the biggest technological developments, so if you like tech and new things, (like I do) jumping on the 29er bandwagon may be the way to go. 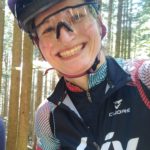 Liv Racing pro rider Sandra Walter’s first time competing for Canada was in 1998 as a junior at the World XC Mountain Bike Championships. She has since flown the maple leaf at 11 more World’s. Her competitive career spans two decades & is fueled simply by a love of the sport. She aspires to achieve new sporting heights, while inspiring women & girls to discover the joys of cycling.